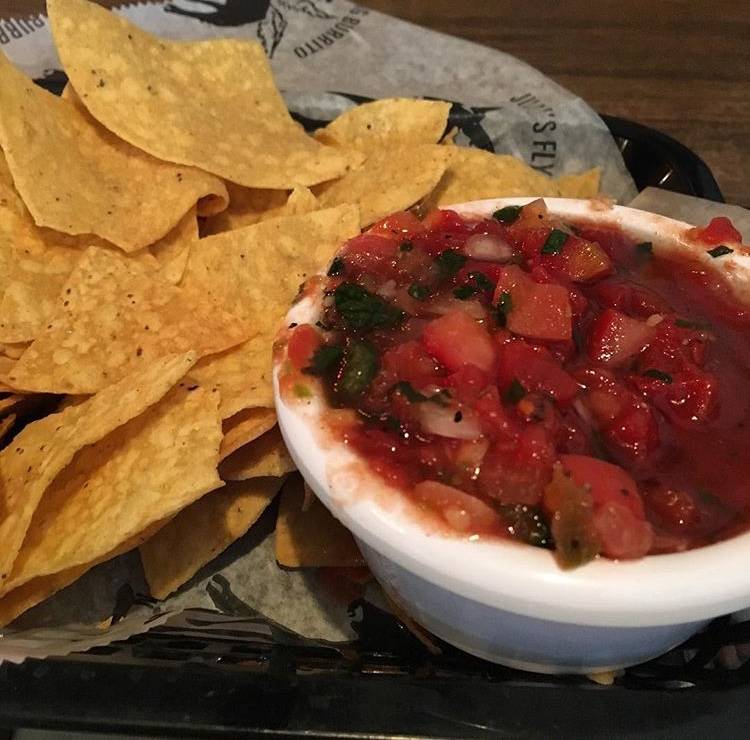 We like to think of ourselves as ambassadors for all things New Orleans. As such, we often get asked by visitors and locals alike for restaurant recommendations. Below is a list of ten New Orleans area restaurants recommended by the Fleurty Girls. This is nowhere near a comprehensive list, so add your suggestions to the comments at the end!

Muriel's Jackson Square occupies a beautiful old French Quarter building right on Jackson Square, but it's the food and drinks you'll be most impressed with. The crawfish and goat cheese crepes are one of the most divine appetizers you can eat in this city. Pair it with the El Diablo cocktail, a rum and ginger concoction with a sweet and spicy rim. If goat cheese ain't your thing, there's always the savory gorgonzola cheesecake (yes, you read that right). There's no wrong answer here as far as entrees go, but we love the Bayoubaisse, a Cajun twist on the old French seafood stew, the pecan and crawfish-encrusted baby drum (heaven on a butter-drenched plate), and, of course, the blackened redfish. No need to break the bank at Muriel's, as there's a Table D'Hote menu available with a set price for your meal. Finish up by visiting the Seance Room upstairs or having an after-dinner cocktail on the wraparound balcony overlooking Jackson Square and the Pontalba Apartments. Recommended by Lauren and Windi

Brigtsen's is a family-owned restaurant in a super cute Victorian cottage near the Riverbend in Uptown New Orleans (take the St. Charles streetcar going away from the French Quarter and get off way Uptown at stop #44). Let's get straight to it: the seafood platter here is a thing of beauty. Filled with grilled drum, sea scallops, two different oyster dishes (including Oysters Rockefeller), shrimp cornbread(!), and shrimp cole slaw (omg), it's known as the "Shell Beach Diet." Nearly everything here is grilled or baked, in case you're watching your waistline. With that said, Brigtsen's serves a bread pudding with banana custard sauce that is to die for. Definitely worth the trip Uptown. Recommended by Caitlin

Arnaud's, in the heart of the French Quarter, is one of New Orleans's restaurant legends. Known for oysters, oysters, and more oysters, a person can have one of the finest dining experiences of their lives within its walls. All the classic Creole dishes can be found here, including stuffed mirlitons, alligator sausage, Oysters Bienville, turtle soup, and shrimp creole. For something a little different, try the soufflé potatoes, rumored to be the result of a happy accident, when King Louis Philippe's chef refried some already fried potatoes to heat them up and they puffed up like little balloons! They're served with a Béarnaise sauce that's so good you'll want to take a bath in it. Arnaud's also boasts its own Mardi Gras Museum which showcases the Mardi Gras costumes of a famous (and lusty!) Arnaud ancestor who reigned as queen of over twenty-two Mardi Gras balls from 1937 to 1968, more than any other woman in the history of Carnival. Recommended by Lauren

Parkway Bakery and Tavern on Bayou St. John in Mid-City has been serving some of the finest poboys in town for over 100 years. You really can't go wrong here, especially if you've got a hangover. Every sandwich, every dessert, every side is just what you want, just what you need. Try the Parkway Surf and Turf, fried catfish poboy, smoked alligator sausage poboy, or get a classic cheeseburger poboy. Make sure you tell 'em you want it "dressed" (that means you want everything on it). Get a side of fried pickles or a bag of Louisiana made Zapp's Potato Chips to go with. For dessert, treat yoself to a slice of the butter rum cake, a vanilla pound cake soaked in butter rum (yes, it's real and you can have some!). Recommended by Jenny

Mandina's on Canal Street (and in Mandeville, if you find yourself on the Northshore) is one of the most talked about and well-known restaurants in New Orleans. Serving Italian classics and homegrown New Orleans favorites, they've got it all here: calamari, spaghetti and meatballs, eggplant parmesan, muffalettas, onion rings, poboys, fried catfish, and so much more. Try one of the daily specials, like the bruccialone with shell macaroni: a plate of veal medallions stuffed with spinach and egg. It's enough for two meals. This is a family-owned, neighborhood restaurant that returned from the flood waters after Hurricane Katrina, and they'll accommodate almost any substitution or request as long as you're nice about it. The Mandeville location even has its own Steak Night. Recommended by Celeste

Juan's Flying Burrito is THE place for awesome, affordable, Creole-American-Mexican food in gigantic portions. Start with some crawfish queso (if they're in season; if not, get the chorizo queso) with freshly made tortilla chips. Have a frozen house marg delivered to your table while you stuff your face with the queso and a Juaha roll, a tortilla packed with veggies, sour cream, and chicken or shrimp, then rolled up and sliced like sushi rolls. Dip that in the salsa provided while you wait on your entree. It's all good, but the standout dishes are the Luau quesadilla, filled with jumbo shrimp, bacon, and pineapple salsa, and the Flying Enchiladas, three enchiladas drenched in sour cream, beans, cheese, and rice, and filled with steak, chicken, and shrimp. A little light in the wallet? Have the Mission Style, a bean, rice, and salsa burrito for only 6 bucks. Check the specials on the wall for desserts. Could be popsicles, could be cupcakes, you never know. Juan's has three locations, but hit up the original joint on Magazine Street in the Lower Garden District if you want the full-on, punk rock Juan's experience. Recommended by Windi

Coop's Place on Decatur is where we send folks who ask us, "Where can I get good gumbo/red beans/New Orleans food?" Check the extensive specials board before ordering--there can be some really stellar dishes available that aren't on the menu. The gumbo and jambalaya are correct and will heal what ails you. Have some fried mushrooms or duck quesadilla from the appetizer menu while you wait for your entree (note that both of these dishes, indeed, most of the appetizers, are large enough to be entrees themselves). All dishes are winners but the Fleurty favorite here is the Chicken Tchoupitoulas, a fat, juicy chicken breast swimming in cream sauce, shrimp, and tasso, with a spicy kick. Wash it down with a Turbodog from home grown brewery Abita Beer. There can be a line to get in, so go on a weekday afternoon, but leave the kids at home; Coop's has video poker machines so it's 21 and up to get in. Recommended by Pam

Mr. B's Bistro is among the illustrious Brennan family of restaurants and serves a delectable mix of fine Creole foods. To start, try the mouth-watering duck spring rolls stuffed with mushroom, spinach and goat cheese, or the fried green tomatoes with crawfish in a meuniere sauce. Mr. B's signature dish, and the one everyone talks about, is their BBQ shrimp. Jumbo (and we do mean jumbo) Gulf shrimp are barbecued and served in their shells, with a peppery butter sauce. Comes with a fat piece of French bread that you simply must use to sop up all that delicious buttery goodness. Don't listen to your arteries hardening...listen to your soul blossoming. Recommended by Lauren

Tanh Dinh is a Westbank treasure and one of the stars of the extensive Vietnamese restaurant community in the New Orleans area. Their menu is huge and you won't know where to start, so just close your eyes and point. Tanh Dinh has everything from calamari to frog legs, from pho to bun to banh mi (all consistently delicious) and everything in between. Tastes range from sweet and savory to mind-blowingly spicy. Don't miss out on the Vietnamese coffee served a variety of ways, and a quirky menu of bubble teas. And yes, they do takeout. Recommended by Michelle

Sugar Park is a Bywater institution by now and rightly so. Next door to Quintron's Spellcaster Lodge and known for their kick-ass thin crust pizza, they also serve up some pretty innovative burgers, some solid Italian favorites like spaghetti and meatballs, and good ol' fish and chips. The Abita battered mushrooms are a must, but save room for the Pommes Frites, fat steak fries which come with your choice of eight (yes, EIGHT) dipping sauces (the garlic mayo!). Have a Toasted Coconut Fizzy with your peanut butter pie dessert and then undo that top button on your trousers for maximum bliss. Don't be disappointed and show up on Monday or Tuesday, though; they're closed at the beginning of the week. Recommended by Jenny

Did we leave out your favorite NOLA restaurant? Tell us about it and why you love it in the comments below!

I just came back from NOLA, and I discovered Dat Dog! It was amazing! The combinations and options are endless. They take the traditional hot dog to an entirely different level.

OMG! I need to book a flight to NOLA STAT!! My mouth is watering!