Betty White is a legend and icon (but you already knew that).

In her eighty-year career, she starred on some of the most beloved shows of all time (like The Mary Tyler Moore Show and The Golden Girls, along with dozens more) and received multiple Emmy, American Comedy, and Screen Actors Guild Awards, as well as a Grammy and People’s Choice Award, not to mention a star on the Hollywood Walk of Fame!

More than creating some of the most memorable roles in history, Betty helped to make the world a better and more equal place. Early in her career, at a time when women had little power in Hollywood, she starred in, directed, and produced her own shows, creating opportunities for other women and for people from marginalized groups. She campaigned to end bullying and has stood up for the LGBTQIA+ community. And she devoted much of her life advocating for the fair treatment of animals.

This innovative picture book biography follows a young boy who is doing a class presentation about Betty White…with a little help from Betty herself! Whimsical yet fact-filled, That’s Betty! tells the story of a life well-lived while celebrating Betty’s many fans.

Read or write a review 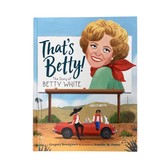